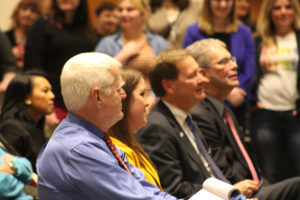 Drake University Law School is the ninth law school in the country to host the traveling exhibit, 100 Years After the 19th Amendment: Their Legacy, and Our Future.” The American Bar Association Standing Committee on the Law Library of Congress unveiled the six-banner exhibit celebrating the ratification of the 19th Amendment last fall. The public is invited to view the exhibit in the Law Library during open hours through Friday, January 31, 2020.

The exhibit, which won a 2019 GDUSA American Graphic Design Award, details the woman suffrage movement and the challenges that remain today. “This exhibit is so timely with the recent state ratifications of the Equal Rights Amendment and the issues surrounding rights in general,” Associate Dean John Edwards said. “The Law Library was very fortunate to secure the exhibit at the beginning of the year to help kick off the centennial and bring these amazing stories to life.”

In addition to hosting the exhibit, Drake Law School celebrated the centennial anniversary of the 19th Amendment with a special reception last week that featured the six banners. The event also included the appearance of a suffragist reenactor, illustrations by artist Gary Kelley as featured in the limited-edition commemorative calendar, Hard Won, Not Done, a performance by Midnight Madness, a barbershop quartet with the Heart of Iowa Chorus of Sweet Adelines International, and more. 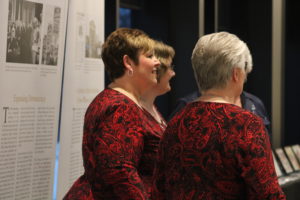 “I’m thrilled to take a moment and honor the efforts of the many individuals who struggled to gain this basic right for women. Sometimes, it seems like progress is a long way off. The efforts of regular people that keep fighting can really make a difference in the world,” Dean Jerry Anderson said as he kicked off the evening.

Mark Kende, Director of the Drake Constitutional Law Center and the James Madison Chair in Constitutional Law, also commented on the significance of the occasion. “The exhibit shows that social change is truly difficult, but possible. But the struggle for women’s equality continues today in many realms of society. We are lucky that many of you here are people moving forward in this effort.”

Kristen Corey, program planner for the Office on the Status of Women, shared opening remarks at the reception. Corey emphasized the inspiration she and others draw from Mary Jane Whitely Coggeshall, whom suffragist Carrie Chapman Catt called, “The Mother of Woman Suffrage in Iowa.”

“Thank you, Mary Jane, and all who have toiled so that we have the rights we have today. Although there is so much work yet to be done, your work was not in vain.”

Roxanne Conlin, LW’66, a nationally-renowned trial lawyer and pioneer for women’s rights, was the keynote speaker at the event. For nearly six decades, Conlin has fought for the rights of others. She reflected on the women, especially fellow Iowans, who paved the path before us.

“We need to know our history. We need to always remember that women suffered greatly—greatly—for the right to vote. We dishonor their memory if we do not exercise it. They earned us the right to vote with their bodies and their blood and we cannot betray them. We must vote.”

The centennial anniversary of the Nineteenth Amendment gives state and local bar associations, lawyers, judges and other legal professionals, educators and civic organizations the opportunity to celebrate 100 years of women’s constitutional right to vote, to educate the public about the Nineteenth Amendment and the battle for women’s suffrage, and to promote law that ensures women’s full and equal exercise of their right to vote and to participate in our democracy.