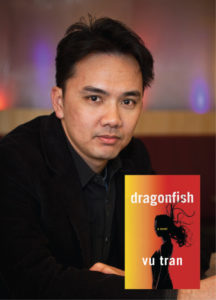 The Susan Glaspell Writers & Critics Series will feature novelist Vu Tran on Thursday, Feb. 28, at 7 p.m. in the Cowles Reading Room at Drake University. The event is free and open to the public.

Tran is the author of Dragonfish, which was listed as a New York Times Notable Book and one of the San Francisco Chronicle‘s Best Books of the Year. He is a criticism columnist for the Virginia Quarterly Review, and is currently an assistant professor of practice in English and creative writing at the University of Chicago.

The series presents public talks and readings by nationally and internationally recognized writers of all kinds, including authors, essayists, playwrights, screenwriters, memoirists, poets, commentators, screenwriters, scholars, and journalists. The events give members of the Drake, Des Moines, and central-Iowa communities opportunities to hear new work by some of the nation’s most accomplished writers in intimate settings on the Drake University campus.

Following each reading, attendees are invited to participate in a brief question-and-answer session. Visitors also take part in classes and engage informally with Drake
students, faculty, and staff.

“At a time when many colleges and universities have cut back on programs like this, we continue to attract talented and sought-after guests, and share with our community some
of the best of contemporary writing and thought,” said Yasmina Din Madden, assistant professor of English and series coordinator. “We’re so proud to have a resource like this series, and we’re fortunate to have such strong support, not just from centers and departments at Drake, but from friends and community members beyond campus, too.”

Born in Vietnam and raised in Oklahoma, Tran received his master of fine arts from the Iowa Writers’ Workshop and his doctorate from the Black Mountain Institute at the University of Nevada, Las Vegas.

Tran’s short stories have been published in the O. Henry Prize Stories, the Best American Mystery Stories, Best of Fence, and other publications. His essays have appeared in Literary Hub, and have been anthologized in The Displaced: Refugee Writers on Refugee Lives.

He is the winner of a Whiting Writers’ Award and an NEA Fellowship, and has also been a fellow at Bread Loaf, the Sewanee Writers’ Conference, and the MacDowell
Colony.

The Glaspell Writers and Critics Series is supported by the Department of English and grants from Drake’s Center for the Humanities, Drake University, the Slay Fund for Social Justice, and the Women’s and Gender Studies Program.

Solving for Rx - Cracking the riddle of EpiPen expiration