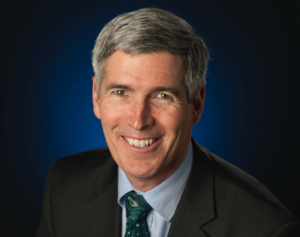 Barry will talk about NASA’s impact over the past 60 years, share thoughts on where the organization will go in the decades ahead, and shed light on some little-known facts about NASA history.

“Space and space exploration have captivated Americans for more than six decades and we’re excited to tap into that captivation and learn more from one of the individuals who knows NASA best,” said Joseph Jones, Executive Director of The Harkin Institute.

Established by Richard Sussman, AS’51, in memory of his late wife Lila, the Sussman Lecture Series takes place twice a year and invites notable public figures to discuss timely topics.

Past speakers have in the Sussman Lecture Series include Columbia, SC, Mayor Stephen Benjamin; Nobel Peace Prize laureate Kailash Satyarthi; and Julie Stewart, president and founder of the organization Families Against Mandatory Minimums.

The Sussman Lecture on November 1 is free and open to the public, but registration is required. This event is expected to fill quickly. Registration is available online here or by calling The Harkin Institute at 515-271-3592. The event will begin at 7 p.m. in Sussman Theater in the Olmsted Center at Drake University.

The Harkin Institute for Public Policy & Citizen Engagement at Drake University exists to inform citizens, inspire creative cooperation, and catalyze change on issues of social justice, fairness, and opportunity. The Institute was founded on the premise that good public policy is best achieved when policymakers have access to high quality information, political processes are open and well-understood, and citizens are informed and active participants. The Harkin Institute offers programming, experiences, research, and connectivity focused on four areas that defined Senator Harkin’s career – labor and employment, people with disabilities, retirement security, and wellness and nutrition.