Drake’s graduate pharmacists have a consistent record of outperforming the national average first-time pass rate for the North American Pharmacist Licensure Examination®, or NAPLEX. The 2017 first-time pass rate was no exception, with 97.2% of graduate pharmacists passing the NAPLEX during their first attempt compared to the national average of 87.6%. Drake’s College of Pharmacy & Health Sciences (CPHS) pass rate was 10th out of 130 programs.

“The CPHS is proud to uphold a culture of preparing our students well for a career in the health professions by combining rigorous academic studies with extensive professional development,” stated Dean Renae Chesnut, dean of the college. “Given that professional licensure is an initial critical step to becoming a healthcare professional, CPHS faculty put great effort into delivering a cutting-edge Doctor of Pharmacy curriculum that provides a knowledge and skills base that prepares our students for contemporary pharmacy practice and for the inevitable changes that will arise in pharmacy practice.”

While exceeding the first-time national NAPLEX average pass rate by 10% is impressive, it is hardly surprising given the college’s rich history of outstanding NAPLEX performance. In the past nine years, the CPHS NAPLEX pass rate has not fallen below 93%; over the past decade, CPHS pharmacy graduates have routinely exceeded the national first-time pass rate with the gap widening in 2016 and 2017. 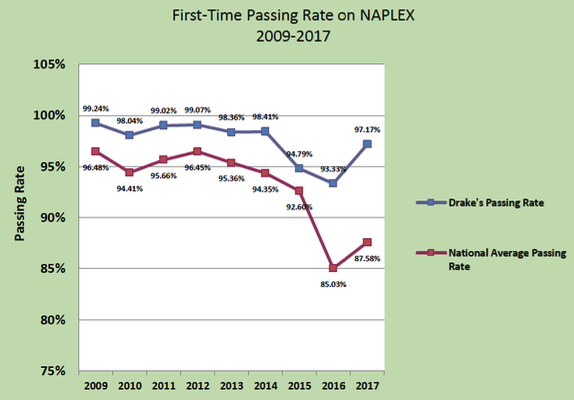