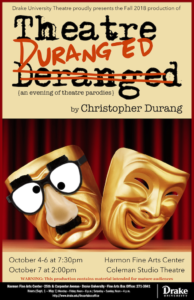 Theatre Durang-ed is directed by Michael Rothmayer, Drake University associate professor of theatre arts. It includes several thought-provoking and comedic collections, including: Euripides’ Medea; Tennessee Williams’ The Glass Menagerie, Cat on a Hot Tin Roof and A Streetcar Named Desire; and Sam Shepard’s A Lie of the Mind and Fool for Love. It’s an evening of laughs intended for mature audiences only.

“The cast is made up of a great ensemble of actors,” said cast member Connor Sullivan, senior BFA musical theatre major. “Each actor plays multiple roles. I have grown as an actor throughout the rehearsal process learning how to switch quickly between characters, while making each role distinct and believable.”

According to Jack Griffin, sophomore BFA musical theatre major, the production has encouraged students to step outside of their comfort zones and immerse themselves in the world of comedy.

Noelle McVicar, senior BFA musical theatre major, is looking forward to seeing how the audience reacts to the production. “I think they [the audience] will be pleasantly surprised and pleasantly confused, but enjoy every second.”