Keys to Excellence continues with Israeli pianist in Beethoven program

** NEW DATE: Due to winter weather, the concert of Asaf Zohar has been rescheduled for WEDNESDAY, FEBRUARY 7 at 7:30 p.m. in SHESLOW AUDITORIUM.** 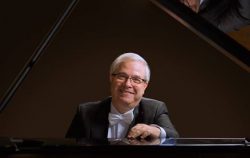 Asaf Zohar, professor of piano at The Buchmann-Mehta School of Music of The Tel-Aviv University, will present the next concert of Drake University’s Keys to Excellence Piano Series at 7:30 p.m. Monday, February 5, in Sheslow Auditorium.

The performance is free and open to the public, and will feature the following piano sonatas of Ludwig van Beethoven (1770-1827).

Born in Israel, Zohar is one of the most active Israeli pianists and pedagogues. He is a graduate of the Givatayim Conservatory and The Rubin Academy of Music in Tel Aviv and he received his Doctorate degree from the Indiana University School of Music, where he was also a visiting lecturer.

Zohar was awarded prizes in Israel and in International Competitions in Pretoria, Sydney, Vienna, and The Robert Casadesus Competition in Cleveland.

Zohar teaches as professor of piano at The Buchmann-Mehta School of Music at The Tel-Aviv University, as well as at The Jerusalem Academy of Music and Dance where he has served as chair of the keyboard department and dean of the faculty of performing arts for 10 years. In addition, Mr. Zohar teaches at the Givatayim Conservatory, as well as in The Jerusalem Music Center.

In recent years, Zohar has edited, lectured and performed in a series of lectured concerts in Israel presenting Beethoven’s Piano Sonatas, Mozart’s Concerti, and piano works of Chopin, Brahms, Schubert and Schumann among others.

The series is supported by Yamaha, West Music, Civic Music Association, and Drake University. For more information, contact Nicholas Roth at 515-321-5947 or nicholas.roth@drake.edu

Message from the CITO