The Supreme Court Celebration recognizes the history of academic excellence, leadership, and service at Drake Law School as well as the Law School’s long-standing relationship with the Iowa Supreme Court.

The celebration concludes with the Supreme Court Celebration Banquet and Awards Ceremony on Saturday, April 1, at Olmsted Center, Parent’s Hall. A reception starts at 6 p.m.; dinner is served at 7 p.m.

During the banquet, student and alumni award winners will be recognized, including the 2017 Alumni of the Year and—new this year—the 2017 Recent Alumni of the Year. The keynote speaker is The Honorable Solomon Oliver Jr., chief judge of the U.S. District Court for the Northern District of Ohio.

About the keynote speaker: 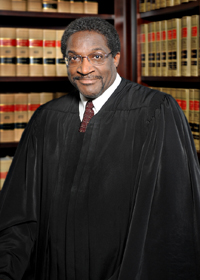 Solomon Oliver Jr. was appointed to the U.S. District Court for the Northern District of Ohio by President Bill Clinton on May 9, 1994. He has served as chief judge since June 1, 2010.

Oliver worked as an assistant professor of political science at the College of Wooster, law clerk to Judge William H. Hastie of the U.S. Third Circuit Court of Appeals, and assistant U.S. attorney for the U.S. Department of Justice in Cleveland. In 1978, he became chief of the civil section of the U.S. Attorney’s Office, and in 1982, he was named chief of appellate litigation in that office.

Oliver joined the Cleveland-Marshall College of Law faculty at Cleveland State University in 1982 and later served as associate dean of faculty and administration. He has written articles and lectured on a wide range of topics, including delivering an address at the historic Sixteen Street Baptist Church in commemoration of the civil rights movement in 2013.

He also presided over a consent decree between the city of Cleveland and the U.S. Department of Justice to create reforms within the Cleveland Division of Police.

Oliver has been a member of the Judicial Conference of the United States, the American Law Institute, the American Bar Foundation, and the College of Wooster’s Board of Trustees. He also served as council chair of the ABA Section of Legal Education and Admissions to the Bar and as co-chair of the ABA Litigation Section’s Minority Trial Lawyer Committee.