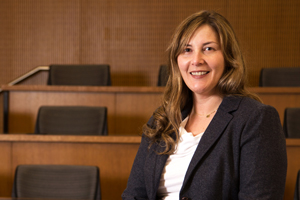 Rising 3L Sable Joseph is trying to fit as many experiences as she can into her three years at Drake Law School.

“There’s so much here that Drake Law and the community have to offer,” Joseph says. “It seems like there are more opportunities than there are students, which is a great thing.”

Last year Joseph worked as a clerk at a small family law and immigration law firm, and this spring she completed an externship with the Iowa Supreme Court, where she worked under Chief Justice Mark Cady.

“It was a great experience,” Joseph says. “With the Iowa Supreme Court, my assignments were both criminal and civil, so I was able to work on all types of cases. I really liked the exposure, learning more about the appellate process and how the Supreme Court chooses cases.”

Now, in the thick of an election year, she’s busy in her summer clerkship with the Iowa Secretary of State’s Office in the Elections Division.

During the primary election in early June – an event Joseph says was “all hands on deck” – she was at the Secretary’s office with other staff providing support to counties in Iowa and publishing the election results.

“It’s wonderful being in the capital city of Des Moines,” Joseph says. “Here I am at the Secretary of State’s Office, and I was just at the Supreme Court. Where else would I have that opportunity?”

Even with all these experiences under her belt, Joseph isn’t done yet. She plans to participate in Drake Law School’s Elder Law Clinic in the fall semester, in addition to her many extracurricular activities, including being a Drake Law Ambassador, member of the Moot Court Board, and treasurer of Older Wiser Law Students (OWLS).

But Joseph says her most important extracurricular is serving as president of the Student Animal Legal Defense Fund, which is what she plans to do with her law degree after graduation.

“I hope to work on animal law issues,” Joseph says. “Companion animal issues, animal welfare, animal rights – basically anything and everything to do with animals.”

“I was able to meet the people who are actually practicing animal law and learn from them and network,” she explains.

Joseph says her experiences are a large part of law school.

“I would say it’s a mistake not to do an internship or a clerkship, or even be on the competition teams,” Joseph says. “You have to have experiences, especially in this job market. What we learn in class is theory, but you need to know how to apply it.”