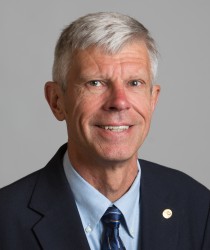 Klaus Bartschat, the Ellis & Nelle Levitt Professor of Physics at Drake University, was awarded the 2016 Will Allis Prize for the Study of Ionized Gases from the American Physical Society (APS). APS represents over 51,000 members, including physicists in academia, national laboratories, and industry in the United States and throughout the world.

Bartschat received the award “for fundamental theoretical and computational contributions to the understanding of charged-particle and photon collisions with atoms and molecules and for providing critical data and insight to the plasma modeling community.” His research is of fundamental importance for basic physics and has broad applications in many areas of research and industry,

The Will Allis Prize was established in 1989 in recognition of the outstanding contributions of Will Allis (1901-1999), an American theoretical physicist, to the study of ionized gases. It is awarded in even-numbered years.

Bartschat is the 14th honoree in the award’s history; recent recipients hail from noted research institutions including the University of California at Berkley (2014), the Queen’s University of Belfast (2012), and the University of Michigan (2010). More information can be found at http://www.aps.org/programs/honors/prizes/allis.cfm.

Bartschat has spent more than 30 years researching atomic collisions involving electrons and light. Many of his studies focus on the processes that cause an incident electron to change direction and potentially lose energy upon impact with an atom, and what the atom does with the energy it gains from that collision. Applications in research and indutry include the optimization of lighting devices and plasma analysis—for example, to measure the temperature of very hot reactions such as those taking place in nuclear reactors. The work is also important for the design of lasers and the edging processes used in the manufacturing of computer chips.

Bartschat received the Diplom in Experimental Physics from the University of Münster  (Germany) in 1981, the Ph.D. in Theoretical Physics in 1984, and the Habilitation (venia legendi) for Physics in 1989 from the same university. During extensive visits to the Queen’s University of Belfast (Northern Ireland) he studied under the mentorship of 2012 Will Allis Prize recipient Philip G. Burke. In 1988, he joined the faculty of Drake University. He has been a Visiting Fellow of JILA at the University of Colorado in Boulder, enjoyed several long-term visits at the Institute for Atomic, Molecular, and Optical Physics at the Harvard Smithsonian Center for Astrophysics, and held a Mercator Professorship at the University of Münster as well as adjunct professorships at several universities in Australia.

Klaus Bartschat’s research focuses on charged-particle collisions with atoms and ions as well as short-pulse intense laser-matter interactions. In addition to developing both the general theory and computational methods, Bartschat is known for his close collaborations with many experimental groups worldwide. He has co-authored more than 300 manuscripts in peer-reviewed international scientific journals, and he published two books and several review articles. Bartschat is a specialist editor for Computer Physics Communications and has served on organizing committees of numerous conferences, including a 6-year term as secretary of the International Conference on Photonic, Electronic, and Atomic Collisions, and multiple terms on the executive committee of the Gaseous Electronics Conference.  He was also the chair of the Theoretical Atomic, Molecular, and Optical Physics Community of the APS (1998-2000).

Bartschat is a Fellow of the American Physical Society (1999) and was recognized among the inaugural group of Outstanding Referees for the APS journals in 2008.