Drake professor’s documentary to screen alongside Smithsonian Institution exhibition on immigration in the U.S.

A documentary film co-produced by Drake University English Professor Jody Swilky will be screened in Iowa this week in conjunction with a traveling Smithsonian Institution exhibition on immigration in the United States.

The Smithsonian exhibition, titled “Bittersweet Harvest: The Bracero Program, 1942-1964,” gives historical context to the current discussion on the complicated issues surrounding immigration in the U.S. The exhibition will be on display April 2 through May 17 in the Visitor’s Center of Living History Farms in Urbandale, Iowa.

Swilky’s documentary, “A Little Salsa On The Prairie,” provides a local perspective on immigration by chronicling the rapid ethnic diversification of the small town of Perry, Iowa.  A combination exhibition tour and documentary screening will be held from 6 to 9 p.m., April 2, and includes a panel discussion with the filmmakers and several of the film’s subjects.

“I am quite pleased that the directors of Living History Farms saw connections between the Smithsonian exhibition and our documentary,” said Swilky, the Ellis and Nelle Levitt Professor of English at Drake. “Although immigration of Latino workers and their families to rural Iowa during the 1990s was not caused by the same circumstances and pressures that produced the Bracero Program, national legislation and the demands of industry—the two determinants in the creation of the earlier program—effected the dramatic demographic change in Perry and other rural communities across Iowa that are tied to the meatpacking industry. Both the exhibition and the documentary shed light on the relationship between national policy, industry, and immigration.” 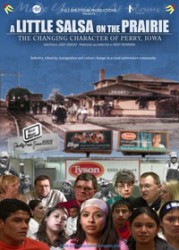 The 55-minute film, co-produced by Iowa filmmaker Kent Newman, explores the significant change that began in Perry in the early 1990s when the complexion of a once predominantly white community shifted dramatically. An influx of Latino workers and their families came from as far away as Texas, California, Mexico, and Central America to work at a local meat packing plant. The city’s Latino population increased from 47 in 1990 to 1,873 in 2000, accounting for 24.5 percent of the total population.

Using extensive interviews, Swilky and Newman documented the history of the town and explored economic, social, and physical changes to the town. The film also tracks a bilingual dialogue process among Perry residents concerning issues related to immigration, employment, and social relations between ethnic groups.

The documentary received top honors at the 2007 Cedar Rapids Independent Film Festival and has been screened more than 40 times in the U.S. and Mexico, and shown on Iowa Public Television and Direct TV Documentaries.

“Bittersweet Harvest,” the Smithsonian Institution’s exhibition, examines the chapter in history beginning in 1943, when President Roosevelt announced the creation of what would become the largest Mexican guest-worker program in U.S. history.

Facing labor shortages on the home front during World War II, the United States initiated a series of agreements with Mexico to recruit Mexican men to work on American farms and railroads. The Emergency Farm Labor Program, more familiarly known as the Braceros Program, enabled approximately 2 million Mexicans to enter the United States and work on short-term labor contracts.

The exhibition explores the braceros’ contributions to communities in Mexico and the United States, and the challenges they faced as guest workers during the war years and afterward.

For more information about the exhibition, which is organized by the National Museum of American History and funded through the Smithsonian’s Latino Center, visit http://www.lhf.org/en/programs__events/bittersweet_harvest_exhibit/.

More information about “A Little Salsa On The Prairie” is available at http://littlesalsaontheprairie.com/.

Drake Theatre: "A Flea in Her Ear" opens April 2