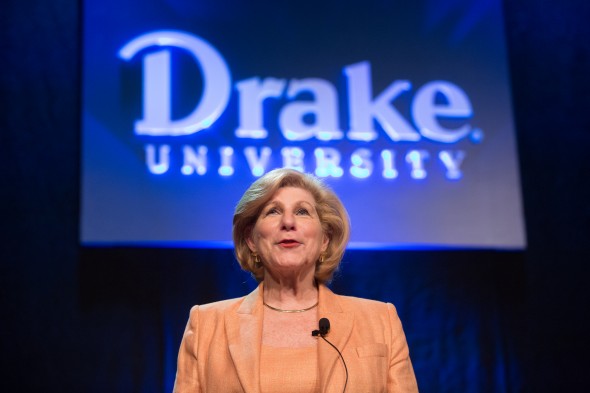 Totenberg opened the 34th installment of the Martin Bucksbaum Distinguished Lecture Series with a rapid-fire string of stories, many of them rife with humor, about the nation’s Supreme Court justices. But for the majority of the evening she shifted subject matter—and to some extent, tone—to focus on the changing judicial environment that she’s observed since she began covering the Supreme Court more than 40 years ago.

The crowd of nearly 2,000, which was populated by students and community members of all ages, was held in rapt attention. Many attendees were members of the legal community who were rejuvenated by the lecture.

The 35th Martin Bucksbaum Distinguished Lecture will be presented by noted civil rights lawyer Peter Neufeld, co-director of The Innocence Project, on October 20 in the Knapp Center. The Innocence Project is a non-profit legal organization that is committed to exonerating wrongly convicted people through the use of DNA testing, and to reforming the criminal justice system to prevent future injustice. As always, the lecture will be free and open to the public.

“It was nice to hear about these cases that I remember from law school, directly from someone who reported on them,” said Jennifer Donovan, an attorney with Iowa Legal Aid in Des Moines. “[Totenberg] struck such a personal tone and really gave you a sense of the people who are involved in deciding historic cases; it’s easy to forget that Supreme Court Justices can be funny, and have human faults.”

An early story that elicited larger-than-average laughs involved Associate Justice Elena Kagan, a Manhattan native who upon confirmation to the Supreme Court had begun hunting birds with Associate Justice Antonin Scalia. Recently she’d taken to hunting game—but her one and only outing had netted her not an elk, but a white-tailed deer.

“As Justice Ginsburg told me in a story last month: Justice Kagan has graduated from birds to Bambi,” Totenberg said.

She poked fun at Iowa’s first-in-the-nation caucuses, which journalists often laud as a reliable test of campaign strength for presidential hopefuls. She agreed that the caucuses are a prophetic event.

“Which is why Iowa has selected Presidents Mike Huckabee, Dick Gephart, Rick Santorum, and Walter Mondale,” Totenberg quipped. “America is holding its collective breath to figure out who Iowa is going to pick next.”

More predictable, but more reflective of our world

Some of the earliest cases Totenberg covered in her journalism career involved the right of Vietnam War opponents to burn draft cards and the right of professional boxer Muhammad Ali to oppose the draft based on his religion.

By contrast, she said: “Today we’ve been at war for more than a decade and a half in Afghanistan and for most of that time in Iraq, but we have a volunteer military with no conscription. Today’s legal questions particularly involve the war on terror, questions of privacy in the NSA, and detention without charge and in some cases without congressional authorization.”

Civil rights issues before the court have changed, as has the public and legal attitude toward those issues: In 1968, gays and lesbians were firmly closeted. The idea of gay rights and gay marriage simply did not exist, and any justice would have thought a colleague “completely nuts” if he’d said he thought there was a right for same-sex couples to marry, Totenberg told the crowd.

But 37 states have now legalized gay marriage, and on April 28 the Court will hear oral arguments on the constitutional right to same-sex marriage. When the Supreme Court refused to block same-sex marriages in Alabama earlier this year, it did seem the justices were telegraphing their decision, she said.

Lee Henderson, LW’09, an attorney who practices in Des Moines, said he was most fascinated to hear Totenberg’s reflections on civil rights.

“They dealt with civil rights issues of a degree and significance that we take for granted now,” Henderson said, though he noted that he doubted whether the Court was tech-savvy enough to deal with some of today’s most pressing issues, including the National Security Agency’s collection of phone and Internet data from private citizens

In a broad sense Totenberg argued for the relevance of today’s court and for the importance of understanding its workings. She previewed this coming year in which the court will hear cases involving religious accommodations by employers; the right to reasonable job accommodations for pregnant women; rules involving the regulation of state redistricting; a major challenge to Obamacare; and many more important issues.

“Today’s court is far more predictable” than in past years, she said, “but is far more reflective of the world we live in.”

A life of mystery

Totenberg’s own life has been anything but predictable. During a private Q&A session with about 50 Drake journalism and law students on Thursday afternoon, she said that she spent her childhood longing to be the fictional serial detective Nancy Drew.

“But then I found out I couldn’t be Nancy Drew because there were no women police detectives at the time,” she told the group. “And I wasn’t always perfect—Nancy Drew was always perfect. So I had to think about what else was possible.

With a self-confidence fostered in part by her father, a concert violinist, Totenberg grew to become a pioneering journalist whose life is in many ways more intriguing than the fictional character she admired. She has spent 40 years as National Public Radio’s legal affairs correspondent and is widely known for her coverage of the United States Supreme Court, which can be heard on flagship programs All Things Considered, Morning Edition, and Weekend Edition.

Students asked Totenberg a wide array of questions, including how she identified interesting radio stories, how she worked amicably with elected officials from both sides of the aisle amid a polarized political climate, and what advice she could give young journalists for keeping personal bias out of her coverage.

“My view of a good story is a story that’s about a clash of ideas,” Totenberg said. “And if I can’t get the leading people on each side to do an interview with me, I end up with something that is lopsided—which I really don’t want. It’s not as interesting of a story that way.”

The soft-spoken but always-engaging Totenberg, who assured students they could probably not muster a question that was too personal for her to answer, encouraged the group to read news from a variety of sources and on a variety of topics. She admitted to reading and disseminating news online—including via Twitter—but said her most enriching experiences often come from scanning the newspaper.

“I worry that people are not reading stuff that’s beyond a paragraph, or two, or three,” she said. “You don’t have to read 2,000 or 3,000 words. But what I think people miss most by not reading an actual paper… is seeing things and reading things you’d never read otherwise.”

Iowans are fortunate to have access to The Des Moines Register, which “remains one of the first-class newspapers in the country,” as well as Iowa Public Radio, a “crown jewel” of the public radio system for its statewide reach and its sterling reputation with politicians of every political stripe. She attributed the media environment to Iowans’ interest in public affairs.

Among friends—at least at Drake

Some of the most difficult moments in Totenberg’s career, she said, came in 1991 when she released her groundbreaking report about University of Oklahoma Law Professor Anita Hill’s allegations of sexual harassment by Judge Clarence Thomas. The coverage led the Senate Judiciary Committee to re-open Thomas’ Supreme Court confirmation hearings to consider Hill’s charges.

“You’re asking people about things they don’t want to talk about,” she said. “It’s extremely unpleasant.”

But she relayed words of advice she received early in her career: “Politicians for the most part are not, and should not be, your friends.”

The 34th Martin Bucksbaum Lecture was the latest in a series that has featured former U.S. President Jimmy Carter and First Lady Rosalynn Carter, professional basketball player “Magic” Johnson, and “Project Runway” host Tim Gunn, among many other influential thinkers and cultural icons.

Religion, Race, Identity: The Role of the Churches in Post-Apartheid South Africa