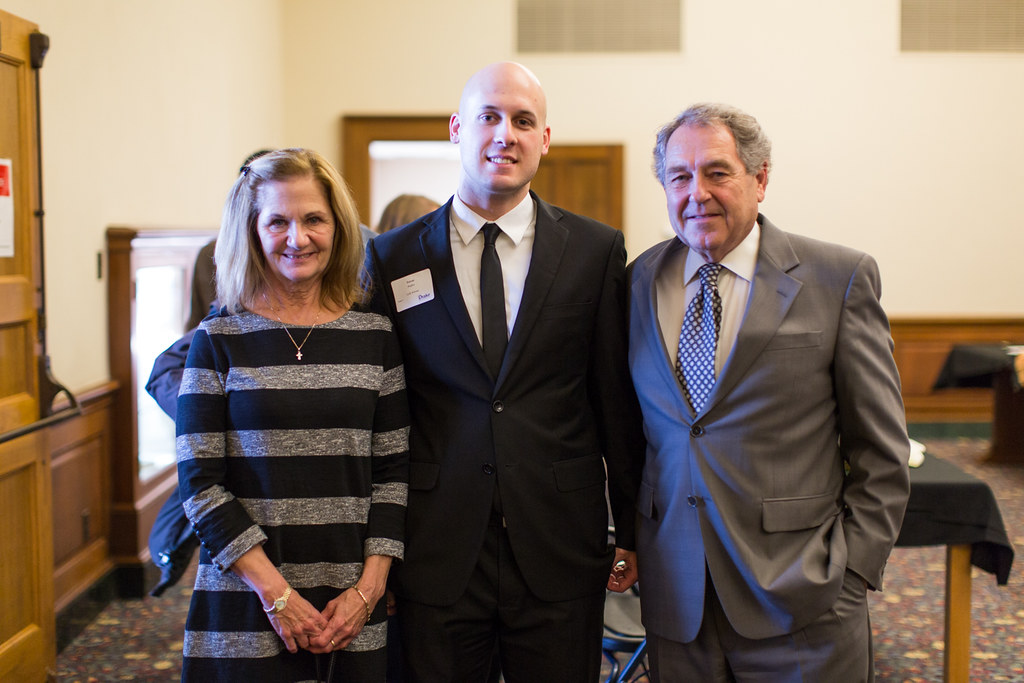 Steven Lytle always knew he’d go to college. He just never imagined that the college would be Drake.

“My parents would have seen that I went to school somehow,” says Lytle, BN’67, LW’76. “But the only way I could afford a private school was with scholarships from many different donors.”

With his tuition halved by scholarships, Lytle enjoyed his time as a Bulldog. His studies propelled him into a successful 35-year legal career, and he shares a Drake connection with his wife Marybeth Lytle, BN’74.

The scholarship Lytle and his family offer every year is not solely to pay forward the generosity of past donors. It’s also to honor the memory of a Drake student who never had the opportunity to finish his education. Steven’s brother, Michael, was killed in Vietnam in 1969.

Michael Linn Lytle studied at Drake for two years and was a member of the Theta Chi fraternity. After his sophomore year he decided to suspend his studies, knowing he’d almost certainly be called to service in the Vietnam War. He was drafted to the United States Army in early 1969 and became an Army Ranger. Then, in October, came the dreadful news that he’d been killed in action.

“My mother, Mildred, my father, John, and I created the Michael Linn Lytle Scholarship with memorial contributions and other donations that we received after Michael’s death,” says Steven Lytle. “It is so rewarding to be able to remember him in this way, and to give back to our alma mater.” [Note: Steven and Michael’s father, John, is no relation to retired Drake journalism professor John Lytle.]

Numerous students—all of whom grew up in or near the Lytles’ native Mahaska County, Iowa—have benefited from the Michael Linn Lytle Scholarship since it was created in 1970.

Young men and women used to stop John and Mildred Lytle in the streets of Oskaloosa to thank them for the family’s generosity. After John passed away in 1980, Mildred remained a fixture in the town, working for a local bank. Steven and Marybeth enjoyed hearing from Mildred about her encounters with the family’s scholarship recipients. But when Mildred passed away in 2012, they found themselves more distanced from those who benefit from the scholarship.

There the Lytles shared a meal with 2014–2015 Michael Linn Lytle Scholar Trevor Hughes, a senior sociology major who was fascinated to hear the story behind his scholarship. Hughes—at age 26, a so-called “nontraditional” student—took classes at two other colleges, and even lived for a while in Australia, before settling at Drake. Now he feels at home at Drake, but like Lytle, he didn’t think he’d be able to afford it.

“I was very hesitant to ask for assistance,” remembers Hughes. “I am not someone who usually feels comfortable asking for support.”

Steven Lytle nodded in understanding. But for his part, he’s anything but hesitant to offer that support.

“The thought that always crosses my mind about the scholarship is, ‘I wish it were larger.’”

Seated around white-clothed tables at the sixth annual scholarship luncheon were students and alumni with diverse stories to tell. But they were united by a common enthusiasm for education—and for Drake.

Attendees heard from Damion Miller, a junior education and sociology major who, as the first member of his family to attend college, was accepted to 14 institutions—none of which he felt he could afford.

“I was a uniquely underachieving high school student,” recalled Fish, who has served as a member of Drake’s governing board. “I applied to eight schools and was accepted only at Drake University. I maintained a 3.1, 3.2 GPA, became editor of the Times-Delphic, and really dived in—which helped with my application for graduate studies. I was ready to do the work [for a Master of Business Administration] at Harvard in part because of the things I learned at Drake.”

Putting the Scholarship Luncheon into broader context was Paul Secord, Drake’s director of development. He reported that 22,000 donors have contributed more than $195 million (it’s now more than $197 million) to distinctlyDrake, the University’s comprehensive fundraising campaign that launched in 2010. Of those donations, more than $42 million has been dedicated to the creation of 170 new scholarship funds.

And with the recent announcement of major capital projects, including STEM@DRAKE and the Ray Center, Secord assured everyone that people stand behind every step forward:

“The best articulation of the transformational power of philanthropy is all of us in this room right now.”

That includes the power of Bulldogs like Michael Linn Lytle, whose memory and legacy endure.