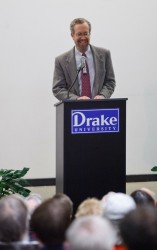 The inaugural Sussman Lecture Series presented by the Harkin Institute for Public Policy and Citizen Engagement filled every chair in Sussman Theater on March 31.

Thanks to a generous gift to distinctlyDrake from Richard Sussman, AS’51, and his late wife Lila, the Sussman Lecture Series was endowed for the benefit and support of the Harkin Institute for Public Policy and Citizen Engagement.

After thoughtful consideration, the Institute selected Scott Shane, reporter for The New York Times, to deliver the lecture on March 31. His presentation, “Edward Snowden vs. The NSA: Leaks, Privacy and the Surveillance State,” attracted Drake faculty, staff, and students and Des Moines community members.

“I think the Drake community is really fortunate to hear from individuals like Scott Shane,” says Marsha Ternus, director of the Harkin Institute. “Mr. Shane was incredibly insightful.”

Shane covers national security as a reporter in the Washington bureau of The New York Times. He recently wrote a portrait of the National Security Agency (NSA) based on some 50,000 of the secret documents released by Edward Snowden, former technical contractor for the NSA. Shane has written extensively about American drone strikes in Pakistan and Yemen and the debate over targeted killing, and his articles on interrogation, written with several colleagues, were finalists for the Pulitzer Prize.

“We strive to bring people to campus who can explain both sides of an issue,” says Ternus, who worked closely with Diane Caldbeck, associate vice president for alumni and development, to select Shane as the speaker for the lecture. “We hope to help people realize that issues aren’t black and white.”

In Shane’s lecture, he discussed the dangers of excessive government secrecy as well as the national security interests at stake and then took questions from the audience.

“This is a topic of interest to many people all over the country,” says Savana Dale, a junior studying advertising. “By attending this lecture, I got an inside look at the Snowden leaks and understand it from an entirely new perspective.”

Shane spoke with an advanced reporting class in the School of Journalism and Mass Communication the morning after this lecture, further discussing both sides of the issue.

“We were all beyond impressed with Mr. Shane’s genuine interest in Drake and Des Moines, and we were so pleased with his willingness to extend his stay to visit a journalism class and attend a student reception,” says Caldbeck. “But for me, one of the most meaningful parts of his visit to Drake was how much it meant to Richard Sussman. It was such a delight to witness his pleasure in how his generous gifts to Drake were being used to benefit our students and the Des Moines community.”

What would Lytle do?