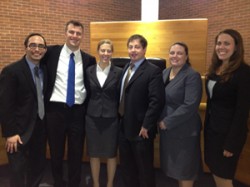 Louis Sloven felt it in the pit of his stomach. “It’s like that moment right before the roller coaster reaches its first hill—it’s so nerve-racking.”

The 2015 juris doctor candidate recently joined two other Drake University law students to compete in the national finals of the 64th Annual National Moot Court Competition, the oldest and most prestigious moot court competition in the country.

More than 190 teams from 131 law schools competed in last fall’s regional rounds held in New York City and sponsored by the New York City Bar Association and the American College of Trial Lawyers. After winning, the Drake team of Sloven (2L), Mara Jones (3L), Kyle Mendenhall (3L) advanced to the national finals, competing against 29 law schools. The Drake team received the third highest brief score and finished third after advancing to the semi-final round.

In addition to the team of Jones, Mendenhall and Sloven, another Drake Law School team consisting of Lori Bullock (3L), Rob Conklin (2L) and Clarissa Thiessen (2L) competed in the regional rounds. That team, which also earned a best regional brief award, was defeated in the regional semi-finals.

“Only the top two teams from each region qualified to compete in the national finals. Mara, Kyle, and Louie rose to the challenge and delivered some of the best arguments that I had heard them or others present,” says Laurie Doré, Ellis and Nelle Levitt Distinguished Professor of Law. “They also wrote an outstanding brief that contributed to their success. Drake should be very proud and excited about the team’s exceptional performance.”

The case this year involved a First Amendment and Dormant Commerce Clause challenge to a state bottle law. The law required retailers to post signs warning of dangers associated with sugar-sweetened beverages, and manufacturers to uniquely mark beverage containers to prevent deposit fraud.

“The most challenging aspect of the competition for me was remaining calm and being able to collect my thoughts quickly under pressure,” says Sloven. “You wait, wondering what the judges’ reactions will be, and what questions they’ll ask. Not knowing what’s ahead is the hardest part.”

“Every single round, I received new feedback and new comments that I could use to become a stronger speaker,” says Sloven. “Overall, I felt prepared for the competition. We practiced with Drake Law professors and alumni almost every day in the month leading up to the first competition. And, of course, I relied heavily on what I learned in my Legal Research, Legal Writing, Constitutional Law, and Civil Procedure classes. I don’t think we would have stood a chance without the support of the Drake Law faculty and the Drake Law alumni community.”

Since 1990, Drake’s teams have placed either first or second in the region a total of 19 times, meaning Drake has qualified to compete in the National Finals 19 out of the last 24 years.

“I’m so proud of the students for their hard work and dedication,” says Doré. “And a special thanks to professors Mark Kende, Miguel Schor, Tony Gaughan, and Danielle Shelton for their help in preparing this year’s teams for the competition.”

What would Lytle do?