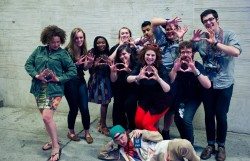 Madeline Cramer, entering first-year student at Drake University, and her slam poetry team from Denver Colo. recently landed the championship title at the Brave News Voices International Youth Poetry Festival in Chicago, Ill. Fifty-two teams from around the world competed at the festival and Madeline’s team was one of four to compete on the final stage.

“The experience was incredible,” says Cramer. “We worked so hard on our poetry and to be able to present to a huge audience was magical. I can’t even describe it.”

Madeline’s team is part of an independent literary arts organization called Minor Disturbance, which is dedicated to helping Denver youth find voice through the medium of poetry and performance. This is the second consecutive year the Denver team has won the championship title at the festival.

“We were very honest in our poems, hoping our message would resonate with the audience,” says Cramer. “We poured our hearts out and they responded.”