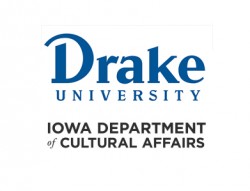 The Iowa Department of Cultural Affairs and Drake University today announced a new partnership that will provide enhanced access to former Governor Robert D. Ray’s papers.  The partnership will allow for a significant portion of the papers to be on loan at the Drake University Archives, along with being able to begin the digitization process.

Alongside Governor Terry Branstad, Governor Ray, and Drake University President David Maxwell, Iowa Department of Cultural Affairs Director Mary Cownie announced the partnership today at the State Historical Museum of Iowa, where she thanked Drake University for supporting DCA’s responsibility for preserving and providing access to the official historical records of the state of Iowa.

“The State Archives recently finished the task of processing more than 1,000 archival boxes of Governor’s Ray’s papers,” Cownie said. “With that work now completed, we are pleased to begin this collaborative initiative with Drake University to digitize and further enhance access to Governor Ray’s records. We expect this will provide even greater access and transparency, while helping Iowans learn more about his service to the state of Iowa.”

“The collaboration that we are announcing today is a meaningful and substantive result of both the University mission and the mandate of our strategic plan,” said Maxwell. “It is a powerful representation of the connection between the State of Iowa and Drake University—a connection of which there is no more powerful symbol than former Governor Robert D. Ray.” 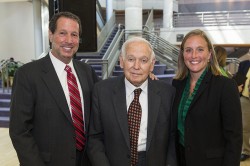 “I am pleased that a significant portion of the archived records of my administration will be on display and available to the public at Drake,” Governor Ray said. “This initiative will strengthen the connections between the state and Drake, two entities that that have played such important roles in my life.”

“This is a dynamic example of how the public and private sectors can work together to benefit Iowans,” Governor Branstad said. “The Department of Cultural Affairs’ State Archives include the governor’s papers from administrations dating back to when Iowa was a territory with some more complete than others. This partnership will take access to Governor Ray’s papers to the next level through digital technology.”

Housed at the State Historical Building, the State Archives includes many collections from state offices, such as papers from the governor’s office, the attorney general, the secretary of state, and the legislature to name a few. The State Archives are overseen by DCA and reflect the historical development and implementation of state policy as well as containing historical information about the State of Iowa during the time period in which the records originated. 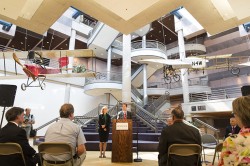 The Records of the Office of Governor Ray are records of the workings of that office from 1969 to1983, reflecting the concerns of citizens, the public policy concerns of the Ray administration, and the administrative decisions adopted by the Governor during that time period.  The Governor Ray papers are a collection of more than 1,000 boxes and were the first administration collection that was comprehensively processed by the state archivists.  “Processing” consists of a thorough arrangement, description of the boxes’ contents and folder listings for areas such as the department, subject, appointments, judicial appointments, correspondence, refugees to Iowa, Iowa Shares, and more.  The archivists also handle conservation issues such as replacing folders, removing rubber bands, and addressing documents on acidic papers for preservation.

Drake University also announced today a lead gift of $1.5 million to the distinctlyDrake campaign from Stine Seed Company and its CEO, Harry Stine. The gift will fund construction of the Drake University Archives and Library Special Collections Center. The archives and center will be housed on the second floor of Cowles Library.

The center, approximately 6,000 square feet, will be set apart from the rest of the library’s second floor. It will contain glass walls, a public viewing space, work areas, and scanners to allow items to be converted to digital formats.

In addition to the papers of Governor Ray, the University Archives and Library Special Collections Center will make available many other historical items. The special collections chronicle the rich history of the University, the state of Iowa, and the nation. Important materials include:

The Iowa Department of Cultural Affairs is responsible for developing the state’s interest in the areas of the arts, history and other cultural matters with the advice and assistance from its two divisions: the State Historical Society of Iowa and the Iowa Arts Council. DCA preserves, researches, interprets and promotes an awareness and understanding of local, state and regional history and stimulates and encourages the study and presentation of the performing and fine arts and public interest and participation in them. It implements tourism-related art and history projects as directed by the General Assembly and designs a comprehensive, statewide, long-range plan with the assistance of the Iowa Arts Council to develop the arts in Iowa. More information about DCA is available at www.culturalaffairs.org.

Drake University is a midsized, highly selective private university in Des Moines, Iowa. Drake enrolls more than 3,400 undergraduates and 2,100 graduate students from 49 states and about 50 countries.

Drake, startup leaders reach out at 80/35 under Startup Central tent

The royal baby: A bouncing bundle of international obsession