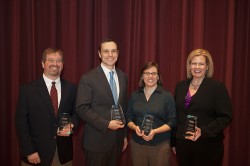 Sarah J. Bethune, BSPS’03, is currently employed at Glaxo-Smith Kline in Philadelphia. She credits much of her career success to her experiences at Drake University. Bethune says the mentorship she received from Dr. Nita Pandit and her participation in the first Donald V. Adams Leadership Institute were key in developing her career path.

Michael W. Allen, PH’98, currently serves as the divisional vice president for generic pharmaceuticals at Walgreen Co. headquarters in Chicago, and has spent his career with Walgreens, beginning as a community pharmacist. Allen says he is thankful for the liberal arts education at Drake, which impacted his life and love of arts and architecture. Allen continues to give back to the University and the College of Pharmacy and Health Sciences by supporting the Lon Larson Engaged Practitioner Award and serving as a member of the President’s Circle Board since 2008.

Jill Haug, PH’99, GR’99, has focused her career on helping pharmacists in hospitals and health systems. She currently works closely with students, new practitioners and more seasoned practitioners as a director of forums with the American Society of Health-System Pharmacists (ASHP) in Washington, D.C. Haug has served on the college’s National Advisory Council for six years, including three years as chair; a member of the Delta RX Advisory Board; and is a member of the Drake University Washington, D.C. Regional Advisory Board. In 2011, Jill received the University’s Young Alumni Achievement Award.

John Bentley, PH’93, is a professor of pharmacy administration and a research professor in the Research Institute of Pharmaceutical Sciences at the University of Mississippi where he focuses on teaching, research, and service. Bentley was instrumental with the establishment of the Lon Larson Engaged Practitioner Award, and credits Drake University for his commitment to lifelong learning. Bentley says working with Lon Larson inspired him to pursue his doctoral degree in pharmacy administration. He says Larson taught him valuable lessons he still uses today and he cites his time at Drake as one of the most rewarding experiences of his life.