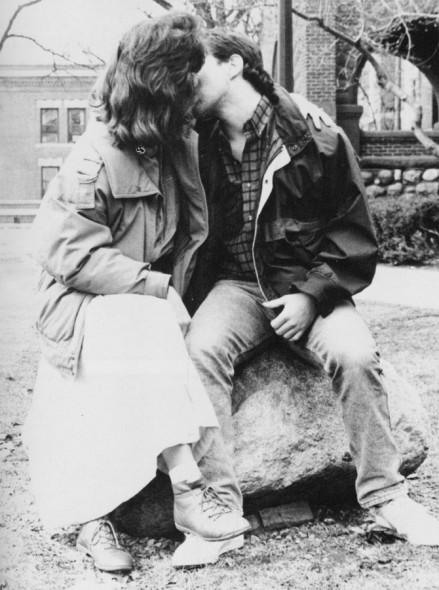 The temperatures are falling, and couples around campus are snuggling up. But instead of staying in, the Student Alumni Association has encouraged students to come outside and celebrate a 114-year-old, 40-ton campus tradition.

Placed under the Chancellor’s Elm as a class gift in 1898, a boulder that eventually came to be known as the Kissing Rock was once a popular spot. Two traditions arose: A woman was not a true “coed” until she was kissed at midnight on the rock, and a dating couple that kissed on the rock would marry and find true happiness. (We hope this pair, photographed in 1989, did.)

But today, few on campus know about the rock, let alone the rock’s history.

“Like any type of fad, it comes and goes,” says Vince Nelson, former director of alumni relations, in a 1989 Times-Delphic article. “When the tree was [cut down in 1969], the kissing rock fad really died out.”

Years later, the Student Alumni Association is determined to bring back awareness of this largely unknown tradition. On Oct. 6, more than 100 students gathered at midnight for food, games, music, and a telling of the story of the Kissing Rock. There may have even been a smooch or two.

Do you have a kissing rock story or photo of your own? Let us know on Facebook or Twitter (@DrakeAlumni).