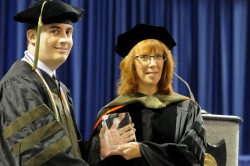 North received the Karbeling Memorial Leadership Award at the 2012 Pharmacy Hooding Ceremony. He was recognized due to his outstanding commitment to leadership in his educational and professional work.

“I am extremely honored to have received an award named after Jerry Karbeling,” North says. “Individuals like Jerry have served as role models for me, and have helped me to appreciate professional involvement and political advocacy.”

The Karbeling Memorial Leadership Award is given annually to one full-time Pharm.D. student. The class of 1974 created the award in memory of Jerry Karbeling, PH’74. He is remembered as an inspiring pharmacist, community and professional leader, and patient advocate. Recipients of the award demonstrate leadership in one or more of the following areas: professional education, association work, community service, and pharmacy practice.

North served as Drake’s student representative for the Iowa Pharmacy Association’s (IPA) Board of Trustees. Creating the framework for the IPA’s CEO succession plan was among North’s most meaningful experiences.

“The opportunity to serve on a board for a state pharmacy professional organization was quite eye-opening for me,” North says. “The IPA has a long-standing history of being innovative and progressive. It was extremely rewarding for me to help ensure that the IPA continues this great legacy.”

On campus, North was president of the Rho Chi Academic Honor Society and the Student National Pharmaceutical Association. He also held a variety of leadership positions in the Kappi Psi pharmaceutical fraternity.

North is now in his first year as a postgraduate pharmacy practice resident at the University of Wisconsin Hospital & Clinics in Madison, Wis.

Drake Writers and Critics Series kicks off with publishing duo