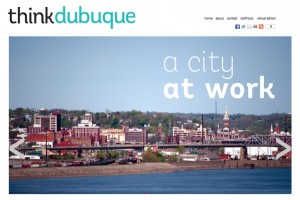 The contest, sponsored by the magazine division of the Association for Education in Journalism and Mass Communication, drew 240 entries from 23 universities in the U.S. and Canada. It was judged by professional magazine writers, editors and designers.

“I’m very proud of our students’ efforts in the online category,” said Lori Blachford, the Peggy Fisher/Larry Stelter Chair of Magazine Journalism at Drake. “Our courses and our instructors, like the rest of the magazine industry, emphasize delivery of information on all types of digital platforms. Recognitions like this show we’re on the right track.”

Think was produced in a spring 2012 senior capstone class of 10 magazine and news-Internet majors. It was taught by assistant professor Jill Van Wyke.

This year, Think explored the forces roiling the economy and the workplace, and the impact on communities. The website focused on how those forces are playing out in Dubuque, Iowa. Think’s staff made several trips to Dubuque, about 200 miles from Des Moines.

The judges praised the online edition as “an easy, visually engaging and often fun reading experience.” “What appears to be a dearth of content at first slowly unfolds into an enjoyable and immersive reading experience,” the judges said. “The interactive graphics are very strong and a lot of fun to play around with.”

Matt Nelson was executive producer of ThinkDubuque.com. “Dubuque was a tough town to tackle,” he said. “Much of the population we needed to speak with had been through turbulent economic times multiple times over, and many of them were initially hesitant to talk to us. And yet it was this perseverance that we so badly wanted to capture — this strange ability to come back from the brink of destruction that Dubuquers exhibited so well. Our trips to Dubuque were somehow heartbreaking and inspiring, and we really tried to capture that conflict on our site.”

Ann Schnoebelen was editor-in-chief of Think, and Sarah Andrews was art director.

Urban Plains, a digital-only magazine, was produced in a fall 2011 capstone class of magazine majors. It was taught by assistant professor Jeff Inman. 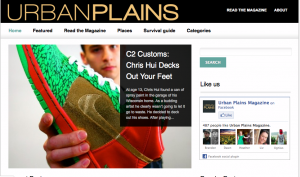 n Plains as “an easily navigable site with edgy visuals and compelling content.” They also praised the staff’s innovation in creating an iPad version that is available for free from the Apple App Store.

Skylar Bergl was editor-in-chief of Urban Plains, overseeing the iPad edition. Joe Stych was executive producer of the website.

Think and Urban Plains are produced with support from the Meredith family and Meredith Corporation.