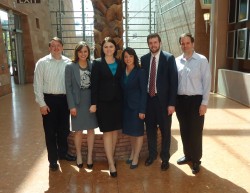 Two student teams from Drake Law School competed in the American Association for Justice Boston Regional mock trial competition this year. They were two of more than 200 mock trial teams from law schools nationwide to compete in 14 regional competitions, with the winner of each region advancing to the national finals.

“Since getting our case in December, our teams have committed countless hours to preparation,” says Sarajlija. “I think our success at the competitions is simply a reflection of the hard work we put in all season long. I am extremely proud all of our efforts paid off and we were able to represent Drake Law School at the national competition this year.”

The mock trial teams were coached by Drake Law alumni Matthew Eslick, LW’05, who placed second in the national competition while competing as a Drake Law student, and Kurt Van Thomme, LW’05.

“I am especially grateful to our coaches for the time they dedicated to the team,” Sarajlija says. “When I look through my first drafts, I know I would not have improved my skills as much as I have without the feedback they consistently provided. This experience has given me the opportunity to work with and learn from some of the most talented attorneys and law students I know.”

During the last 10 years, Drake has won the regional title four times and twice reached the final round of the national tournament.