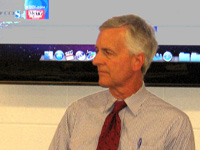 “You want to be the solution to a problem the employer’s trying to solve,” KCCI (TV) News Director Dave Busiek advised two Electronic Media classes April 16. Busiek celebrates his 33rd year at TV8 this month. Following three years as a reporter-anchor at WHO-AM, he accepted a reporting job at KCCI that led to anchoring and then management.

He said positive first impressions on a resume tape are vital. Appearance and voice are both important. “Would I watch this person” on a daily newscast, he asked the 20 JMC67 and JMC173 students gathered in the Digital Palace?

He advised students to begin their audition tapes with a montage of 3-5 stand-up segments that ideally feature the reporter doing something. “Lead with your best,” he cautioned. Applicants must display their story-telling abilities in the handful of stories included in a reel.

Busiek said he receives 80 applications for a typical opening. “It’s just a business. I have a ‘yes’ pile and a ‘no’ pile” into which he sorts materials within a short time. “We  are looking for assertive people, but not pests,” he responded to a question about followup to an application. He told students to be sure to contact their references.

“I’ve really learned to listen for ‘red flags’ from references. Busiek said he receives a majority of applications electronically with links to video.