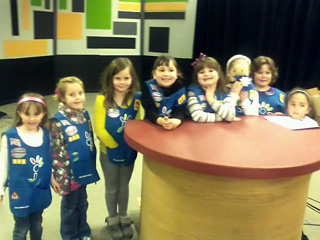 Ankeny first-graders from Troop 245 enjoyed a field trip to Drake March 9 that included a tour of the radio and television studios, and a pizza party in Olmsted. Scout leader Jenny Irlmeier and her Troop were hosted in Meredith Hall by Katherine Fritcke, KDRA-LP’s announcer manager. The Daisies also visited Cowles Library, a residence hall room and Hubbell Dining. “We wanted the girls to see a local college campus and I thought they would be interested in the radio/TV set,” Irlmeier wrote.

Teaching and Learning in Belize