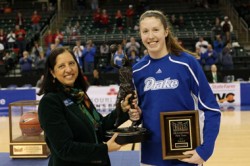 ST. LOUIS â€“ After leading the league in scoring (19.3),
rebounding (11.7) and field goal percentage (.531), Drake’s Rachael Hackbarthhas been named the 2012 Jackie Stiles MVC Player of the Year â€“ becoming the
first Bulldog since 1998 (Kiersten Miller) to earn this award. Hackbarth also
leads the nation with 22 double-doubles, including 15 straight to close out the
regular season. She ranks in the top-20 in NCAA Division I in rebounds per game
(sixth), points per game (20th) and field goal percentage (20th).

In her first season at Illinois State, Jamie Russell is this
year’s Newcomer of the Year. A junior transfer from Wisconsin, Russell ranks in
the top-10 in the league in five different categories, including first in
steals (2.6), second in assist/ turnover ratio (1.4), sixth in assists (3.4)
and free throw percentage (.800) and eighth in scoring (13.5). She has pro-
duced double-digit scoring efforts in 17 of the last 19 games, with a
season-high 30 points at Eastern Illinois. Russell took home the league’s
Newcomer of the Week honor six times this season, en route to being the
first-ever Redbird to win Newcomer of the Year honors.

Wichita State senior Haleigh Lankster earns this year’s
Defensive Player of the Year award. The Tulsa, Okla. native ranks second in the
league in steals, recording 2.5 per contest, including four games with five or
more steals. Her 244 steals rank third all-time in Shocker history. Lankster is
also efficient on the offensive side of the ball, ranking 17th in the league in
scoring (11.9), while shooting .435 from the field and .811 from the free throw
line. This season, Lankster became the 17th player in Wichita State history to
score 1,000 points, and now ranks ninth with 1,313 in her career. Lankster is
the first-ever Wichita State player to win Defensive Player of the Year honors.

Southern Illinois’ rookie phenom Cartaesha Macklin is this
year’s Freshman of the Year after she burst onto the Valley scene, ranking in
the league’s top 10 in scoring (2nd), assists (5th), offensive rebounds (5th),
free throw percentage (7th) and assist/turnover ratio (7th). Her 481 points
rank seventh in SIU history for single-season scoring, while also setting a
record for scoring by a Saluki freshman. Macklin finished second in the league
in scoring with 16.6 points per game, which ranks third nationally among all
freshmen. She also set the Saluki single-season record for free throws made,
165, which is 40+ more than the next closest (123). Macklin is the second
Southern Illinois player to receive the league’s Freshman of the Year award,
and the first since the 1995 season.

In just her second season at the helm, Illinois State’s
Stephanie Glance has been named the league’s Coach of the Year, guiding the
Redbirds to the No. 2 seed at this week’s State Farm MVC Tournament after her
squad was picked sixth in the Valley preseason poll. Illinois State finished
the regular-season with a record of 18-11 (13-3 MVC), finish- ing in the
top-two in the league standings for the sixth-straight season. In Glance’s two
seasons at Illinois State, the Redbirds have lost just one regular-season
Valley home game and just four games total at Redbird Arena. She joins Robin
Pingeton (2004, 2010) and Jill Hutchison (1985, 1989, 1996) as the only other Redbird
coach to earn Coach of the Year honors.

73 years in the making