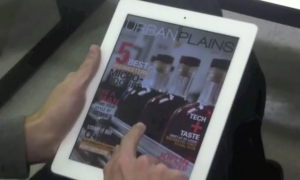 Select students in the semester-long endeavor were tasked with publishing Urban Plains, a blog devoted to Midwest living among the young adult set. A mixture of original and syndicated reporting, purely as a function of the students’ limited time, the website utilized partnerships with regional bloggers to fill its daily stream of content.

“Covering 20-somethings in the Midwest encompasses that sort of pride that you have coming from your hometown,” executive producer Joe Stych said. He classified the Midwest asthetic as more “classical” than other areas of the country, in the way Midwesterners, even 20-year-olds, approach trends.

“It almost seems that we perfect a lot of things – ideas that come out of the coasts,” said Stych. “And when we do, they’re on to something else.”

While the Urban Plains site has been in production for much of the semester, it only accounts for half of the class’ efforts. The second track of the course was in curating, designing and publishing a native iPad magazine application by semester’s end.

The students used Mag+, a WYSIWYG (what you see is what you get) publishing tool that integrates with Adobe’s InDesign and, according to its site, requires “no coding” to create iPad- and Android-ready apps.

Designing the iPad app for the one-off Urban Plains magazine has two summits: one technological, the other asthetic. Game developers and content providers – as well as publishers – all are finding the old rules of TV and print don’t shoehorn into the mobile space.

“It requires at sometimes a different sense of storytelling,” said Inman. “How can the art and the text work together in a different way?”

Tonight, the team behind Urban Plains will be gathering at Des Moines’ Kirkwood Lounge to celebrate the release of its one-and-only issue and the (Apple approval-pending) second iteration of its iPad app – in the spring, the class used Texterity to create an app with a PDF-like experience. The event is free and open to the public.

Here’s a preview of the app, posted by Urban Plains on YouTube:

Unfortunately, despite creating a pair of products that rival large-scale e-publishing brands in the commercial space, the figurative band is breaking up at the end of this semester. Inman acknowleges the student staff would get more production out of their prepatory work if the class could be a two-semester course, or some sort of continuous academic study. Several of the students expressed their remorse at not getting to put out a second issue of the magazine, if only to build on the learning and mistakes of the first go-round.

Despite the from-the-ground-up approach of this class, all the students see themselves going to work for larger publications after graduation.

“Five years ago, a majority of students saw themselves moving directly from Drake into [Des Moines magazine and book publisher] Meredith,” said Inman. “And that’s not necessarily the case anymore.”

“I think it difintely will change my approach,” said Stych of the entrepreneurial undercurrent in the class. But he wants to get a stronger sense of the publishing world prior to embarking on his own: “Eventually I’d love to start my own [publication]. This has defintely taught me how to pull my own weight on the web.”