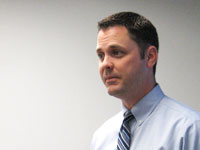 Fales’ class presentation concentrated on how video, sound and words complement one another in the effective feature story. He urged students to build their stories, a layer at a time, and include a surprise or two along the way.

JMC100 is a core requirement for Radio-Television Producing and Broadcast News students. It’s typically completed during the junior year.