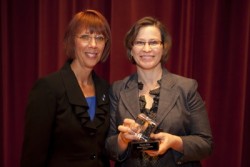 The
award, considered a coveted honor for CPHS faculty, was presented during the school’s Pharmacy and Health Sciences Day
on March 8.

Soltis began her
career in the College of Pharmacy and Health sciences in 1998. She
received the Hartig Faculty Development Award in 2006, and the Hartig
Distinguished Professor award in 2010.

Soltis also serves
as Assistant Dean for Clinical Affairs. She is a member of the College of
Pharmacy and Health Sciences Administrative Committee, Academic Affairs
Committee and Experiential Review Committee. She earned a bachelor’s
degree in pharmacy from Butler University

Soltis is a founding member of the
District V Experiential Workgroup — a group comprised of experiential
education faculty within the member National Association of Boards of Pharmacy
District V Colleges. The group developed a comprehensive quality assurance program
for experiential sites that has been implemented at numerous institutions,
including Drake.

Soltis is
involved with professional pharmacy organizations such as the Iowa Pharmacy
Association (IPA) and the American Association of Colleges of Pharmacy (AACP),
among others. She has partnered with the University of Iowa and the IPA to support
the Collaborative Education Institute and a preceptor development program
applied to college curriculums nationwide. Soltis serves on the Board of
Directors of AACP and Hillside International Healthcare.

Granberg, a leader in the
profession, served as president of the Iowa Pharmacy Association, director of
the Accreditation Council on Pharmacy Education and editor of the American
Journal of Pharmaceutical Education.