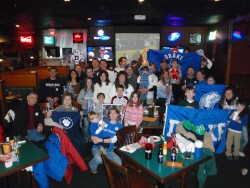 He had recently moved to Tennessee and suddenly felt like the lone Bulldog in a sea of Southeastern Conference sports fans. Noble said he was “tired of being subjected to everyone’s passion for SEC schools,” and decided to throw his own Drake-themed event.

It started small — just a few friends gathered at a sports bar to watch the men’s basketball team play on satellite television. But from there, it blossomed.

The annual event, now in its 21st year, has evolved into a family-friendly fundraiser attended by approximately 50 or 60 people each year. This year’s Drake-A-Mania will be held Jan. 29 at 11 a.m. at the Cross Corner Bar and Grill in Brentwood, Tenn. All are welcome.

“I had no idea it would become this annual event that everyone looks forward to,” he said. “It just caught fire.”

The event is a casual gathering. Noble makes T-shirts, bandanas and buttons to give away and other items are raffled to raise money for Special Olympics or another charity. Many of the “Drake-A-Maniacs” have attended for years, so watching footage from past events has become a favorite tradition.

“We get to see what we looked like back then,” he said. “We had a lot more hair.”

Though many of those in attendance each year are not Drake alumni, Nobel said they all wear their Drake blue with pride.

“Everybody loves Drake that day,” he said.