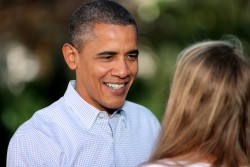 Obama, Clubb and dozens of Drake staff, students, friends and neighbors gathered behind her home for a “Backyard Discussion,” one of a series of events designed to allow ordinary citizens to interact directly with the president.

The discussion included a brief speech by Obama and questions from the crowd. Topics of the day included poverty, unemployment, the wars in Iraq and Afghanistan and many more.

All but one of Drake sports’ head coaches were present, with eight student-athletes assisting with check-in and logistics for the event. Drake President David Maxwell and his wife, Maddy, were also on hand, as well as other officials and representatives of the university.

Seth Van Deest, a sophomore business major who plays center for Drake’s men’s basketball team, checked guests into the seating area. “This was a once in a lifetime experience,” Van Deest said. “He did a good job answering questions on key issues affecting America.

“You come to Drake for more than athletics; you come for academics, you come for experiences and opportunities like this.”

Iowa Gov. Chet Culver, a Drake graduate, and Des Moines Mayor Frank Cownie sat just behind Sandy and Jeff Clubb during the event, which was covered by national and local media of all sorts.

Prior to Obama’s address and questions, the Clubb family met privately with the president, who was described by Sandy as a wonderful guest.

“Believe it or not we saw, met and greeted the President at our front door. We were able to visit with him privately for about 15 minutes,” Clubb said. “The first question he asked was ‘You have to tell me how the Bulldogs are doing.'”

Following his speech, the president spent much of the question-and-answer period explaining and defending recent legislation and platforms supported by his administration.

Responding to a woman’s concern that she and her mother will lose their health coverage due to the administration’s recent health insurance reforms, Obama said, “If you’re happy with what you’ve got, nobody’s changing it. “¦ If you don’t have health care, then it’s just going to help.”

A small business owner expressed concern over Obama’s plan to raise taxes on the nation’s wealthiest. The president explained that the new tax only affects those with an annual income above $250,000, and defended the current tax levels.

Clubb and her husband, Jeff, both registered Democrats, are not exceptionally active politically. A Des Moines Register article cited Iowa Rep. Janet Peterson as the individual who nominated the Clubbs, who were then chosen from a pool of candidates by White House staffers.