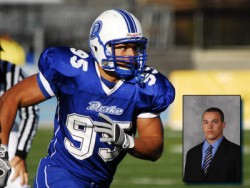 The bowl game, presented by the Collegiate Development Football League will be held in December at the Joseph St. Lawrence Sports Complex Stadium in Ramapo, N.Y.

Player selections for the showcase game begin with the selection of the FCS Senior Scout Bowl All-American team members. This preseason team recognizes the football achievements of senior players who are entering their final season on the FCS level.