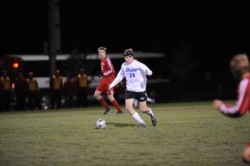 The Bulldogs’ 2009-10 record of 16-7-2 earned the team a No. 14 ranking when the poll was released in early August, and the team is the lone Missouri Valley Conference representative in the Top 25.

“I’m genuinely excited to be recognized in the coaches’ poll,” said Drake Head Soccer Coach Sean Holmes, who has led the program for 13 years. “It is a nice reward after last season’s tremendous performance, and now it’s time for our young players to step up.”

The team has also garnered recognition from TopDrawerSoccer.com, a national soccer news outlet that gave the Bulldogs a ranking of 16th in its preseason Tournament 48 projection of teams likely to make the 2010 NCAA Tournament.

Kuhn, who was selected by a panel of 8 MVC coaches, started all 25 games for Drake during the 2009-10 season.  He has also been named to the All-MVC Scholar-Athlete first team for the second consecutive campaign and the ESPN Magazine Academic All-America second team.

Coming off the best season in school history, Drake will face a challenging 17-game schedule, including dates with six 2009 NCAA Tournament participants.

“I’m thrilled at the level of difficulty of our schedule,” Holmes said. “It has taken us a few years to build this up and I think this is a reflection of our advancement to last year’s Elite Eight. I don’t look at it as daunting, but rather as another great new challenge.”