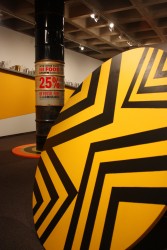 “A Fork in the Road: The Time and The Place for Local Foods,” opened Friday, Aug. 27 and ran through Sept. 16 in the Anderson Gallery of the Harmon Fine Arts Center.

Hilary Williams, visiting assistant professor of graphic design at Drake, created the project, and her artwork was an integral element of the exhibit. She was inspired to create the project while researching statistics about the relationship between food, fossil fuels and global warming.

“I began to focus on the task of visualizing the invisible in our everyday eating habits,” she said.

“A Fork in the Road” provided information on alternatives to the industrial food system, with an emphasis on local and regional foods as a solution to reduce global warming. 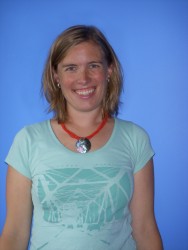 “My project seems to have become more timely as it has evolved,” said Williams, who began the endeavor in 2008.

“First the unprecedented global economic crisis and now the massive oil spill have revealed that the large-scale systems that we often take for granted are not necessarily stable or sustainable, and so it is increasingly apparent that we need to develop alternative systems.”

The exhibit was shown at the UT Downtown Gallery in Knoxville, Tenn., where it received a 2010 How International Design Award for environmental graphics.

Recently, Williams created “Iowa Ingredients,” a seasonal foods calendar that lists 120 locally grown and locally raised foods and when they are available.

“My hope is that if people become more aware of what is available and when it is available, then they might be more likely to choose local food options,” Williams said. “We’ve become so accustomed to getting any food at any time of year from any place. By visualizing local seasonality, my hope is to revive a greater connection to the land.”