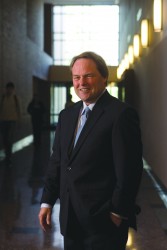 Hamilton was one of eight witnesses to address the committee today. The House meeting schedule is available online.

In his testimony, Hamilton made several recommendations to the
committee for creating a sustainable farm bill. He encouraged the
committee to:

Hamilton, who has been involved with local marketing for years,
placed heavy emphasis on the role policy can play in supporting small
and rural markets.

“I encourage you to follow the pick-up trucks and vans back home to
hundreds of small towns to see the day’s sales being counted on the
kitchen tables,” Hamilton said. “Then you will see urban money flowing
back to farms and rural towns where it is spent and invested by
thousands of farms and businesses.

“No, these farms will not feed the world, but they do help feed millions of citizens and support thousand of farm families.”

Hamilton also spoke about the community of farmers, consumers and
rural citizens who have become disconnected from one another because of
today’s food economy.

“In our food system we have severed many of the connections between
people and their food and between farmers and consumers — and we have
paid a price for doing so,” he said. “Efforts to build local and
regional markets make good economic sense — and help reestablish
connections and increase understanding of farming. Local markets put a
face on our food and benefit all farmers.”

Today’s
testimony makes Hamilton’s second trip to Washington, D.C., this month.
He traveled to the Capitol last week to speak as a panelist at the
White House Clean Energy Forum, sponsored by the White House Council on
Environmental Quality in cooperation with the U.S. Department of
Agriculture.

“It was an honor to be asked to speak to the gathering of
individuals working to promote renewable energy as a form of economic
development for rural America,” Hamilton said.

The purpose of the event was to bring together and engage
stakeholders, businesses and community leaders in a discussion about
clean energy and agriculture. The panel was part of a series of clean
energy forums that the White House has organized with agencies
including the:

The forum highlighted the benefits of clean energy, proposed and
current climate legislation for rural America and agriculture and the
administration’s commitment to making the legislation successful.

The event also aimed to educate state and local agricultural
officials as well as environmentalists and renewable energy companies
about the environmental and economic benefits of renewable biofuels.