Last month marked the 101st running of the Drake Relays, which continued its history of astounding athletics at Drake stadium while bringing longstanding Relays elements to the larger community.

Drake celebrated a new reigning Beautiful Bulldog, Meatball; more than 1,600 runners of all ages and abilities turning out for the inaugural Grand Blue Mile; and an astounding 18 track and field records set.

Ryan and Kati Anderson of Des Moines considered themselves lucky to get their bulldog named Meatball entered in Drake University’s Beautiful Bulldog Contest. The annual competition reached its capacity of 50 contestants in the first 22 hours of registration. View photos of more of the contestants in an online gallery.

The Andersons said they never expected their year-and-half-old bulldog to win the contest as a rookie attempting to become the official mascot of the Drake Relays.

“We’re shocked and really excited that he won,” Ryan Anderson said after Meatball donned his crown and cape and sat down on his throne to accept accolades and gifts.

Des Moines Mayor Frank Cownie presented Meatball with a key to the city. Other prizes included a bouquet of flowers from Boesen the Florist and a Three Dog Bakery cake, which Meatball licked repeatedly.

Meatball also seemed to delight in giving kisses to well-wishers who surrounded the throne, which was built by Drake pharmacy professor Chuck Phillips. In fact, the Andersons brought a sign to the contest with the warning: “Beware of licking.”

The 101st running of the Drake Relays got off to a sterling start as Kenya’s Boaz Lalang posted the second-fastest outdoor mile time in the world, running a personal best of 3 minutes 54.33 seconds to win the inaugural Grand Blue Mile.

More than 1,600 participants, in six different divisions, ran the mile course in downtown Des Moines with the temperature at 72 degrees for the first race.

“I knew this mile would be good for me,” said Lalang, who advanced to the semifinal round in the 800 in the 2008 Olympics. “I was feeling great in the last 200 (meters) and knew I was going to win but I didn’t know it was going to be fast like that.

Both Lalang and Lagat also ran in the men’s invitational mile as part of the Drake Relays at Drake Stadium. 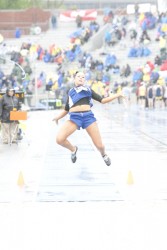 In addition, Damu Cherry, who finished fourth in the 2008 Olympics,
tied a world leading mark in the women’s 100 hurdles of 12.65.

Drake senior honored for his mathematical and scientific computing paper