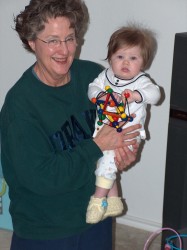 Two middle-aged men sit at a round table among rows of low bookshelves. One man, with graying hair and a faded John Deere hat, slowly reads a list of sentences from a spiral notebook, stuttering over the word “splattered.” His tutor, a younger man in a blue polo, wears a constant, comforting smile as he listens to his adult student read.

The pair meets once a week for an hour in the Drake University School of Education, and through the Adult Literacy Program, the weathered student is learning to read at 42 years of age.

This would not be possible without Anne Murr, who has been the director of the Adult Literacy Program for 12 years. In 2009, the program taught 114 adults in the Des Moines area how to read and write.

“We help them understand themselves,” Murr said. “It gets rid of those emotional issues that came with not being able to read; reading is something negative for them.”

Born in California, Murr moved to Colo, Iowa, when she was in fifth grade. Her family moved again, this time to Des Moines when she was in middle school. She graduated from East High School.

Murr took classes at Simpson, Morningside College and the University of Northern Iowa, traveling with her husband as he taught at those colleges. She ended her undergraduate schooling at Drake University with a degree in elementary education and an endorsement in early childhood education.

“Really, where didn’t I go to college?” she said with a laugh. “I went to a few different schools because I got married young and started having kids, so I came back to college as a nontraditional student.”

Murr’s early childhood endorsement helped her get into the field.

“Through that program, I learned about how literacy is formed and how children learn to read,” Murr said.

But she didn’t begin at the Adult Literacy Center right after getting her undergraduate degree. Murr began at Head Start right after graduation. Head Start is a child development center at Drake for children from birth to five years of age in families that fall below the federal poverty line.

“I worked and took my six hours a semester that I got for free as an employee towards my master’s degree,” she said.

Through the knowledge and experience she gained at Head Start, Murr found her true passion.

“I found that I most loved working with families and parents, helping them reach their goals,” she said.

Murr volunteered as a tutor for a year and a half in the Adult Literacy Program when the director announced her retirement. Murr made the decision to step into the position and never looked back.

Her role is an important one. The Adult Literacy Program was initially started with a federal grant. But after that money was used up, the program was taken on and continued on a completely volunteer basis.

As the director, Murr is in charge of taking applications and assessing candidates for the program.

“That’s when I get to hear how not being able to read hurts them,” she said. “Everyone has a story.”

She also coordinates volunteer tutors and pairs them with adult learners. There are 70 students enrolled in the two-year program, with 86 volunteers that Murr trains and individually matches with students. While Murr downplays the amount of work that can go into making the program run smoothly, it doesn’t go unnoticed.

“She is the Adult Literacy Program,” said Kris Crabtree-Groff, who works across the hall from Murr in the School of Education. “She is the face, the director and the advocate of all the clients. It’s not just a job, you know, it’s in her heart. It’s her passion.”

Murr’s background in elementary education allows her to understand literacy formation and what it takes to regain the sense of language that is necessary to become literate at an older age.

“What a good reader knows is a natural progression,” she explained. “You don’t know why you know things, you just know them.But for these students, the whole process of learning to read has to be practiced and internalized.”

The program begins with phonics and pronunciation, moving from one-syllable to two-syllable words and beyond.

“It takes years,” Murr said. “This isn’t about getting them to a high level. It’s allowing them to be functional in a world of words; they can be independent.”

More than anything, Murr has stayed with the program for 12 years because of her immense passion for the program and what it does for its students.

“If you ever volunteer with adult learners, you get hooked,” she said, her eyes twinkling. “I can see the students becoming more confident, gaining their self-worth again. There is so much gratitude and need; you just can’t walk away.”