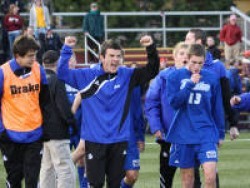 
The Bulldogs will be tested by the 2008 national runners-up for the first time in school history in a 5 p.m. CST start. Live stats and video streaming will be available at www.ncaasports.com.

The winner of Friday’s match, which marks the third overall meeting between the Bulldogs and a school from the Atlantic Coast Conference, advances to the College Cup in Cary, N.C. The winner of that game will face the Akron/Tulsa showdown champion on Dec. 11.

Read an account of the entire game online and view features about the team on KCCI-TV and WOI-TV.

Both North Carolina and Drake played two common opponents this season — Evansville and Boston College. The Tar Heels defeated the Purple Aces, 4-0, on Sept. 6, before falling 2-1 to the Eagles on Oct. 17. In addition to defeating Boston College last week, Drake earned 1-0 and 2-1 victories over the Purple Aces on Oct. 10 and Nov. 15, respectively, while falling 1-0 at Evansville on Oct. 23.

Drake is making in its second consecutive NCAA Tournament after qualifying for the event for the first time in school history a season ago. The Bulldogs are 3-1 all-time following their 6-4 victory at Boston College. A year ago, Drake nearly pulled the upset at St. Louis as a goal with four seconds left in double overtime earned the Billikens a 1-0 triumph.

Under Holmes, the Bulldogs have posted an 103-101-24 record and have built a legacy of excellence on Drake’s campus and in the Missouri Valley Conference. He led the Bulldogs to a school-record 13-5-1 mark in 2008, including six-consecutive shutouts to open the season while Drake finished second in the MVC and made its first-ever NCAA tournament appearance.

North Carolina (15-2-3), led by head coach Elmar Bolowich in his 21st campaign, is coming into play off a 1-0 home triumph over Indiana on Nov. 29. Sophomore Billy Schuler paces the Tar Heels in goals (9), scoring (22), shots (53), shots on goal (30) and game-winners (7), while ranking second in assists (4). Senior Brooks Haggerty directs North Carolina in net, having posted 44 saves and owning a 0.57 goals against average.