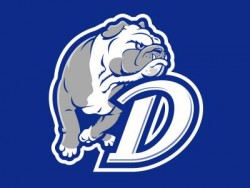 DES MOINES, IOWA – The Drake men’s and women’s soccer team earned recognition for efforts in the classroom as five Bulldogs were tabbed as CoSIDA ESPN The Magazine Academic All-America all-district VII selections.
Named to the first men’s team to remain in contention for national Academic All-America laurels are:
Named to the second team women’s Academic All-America all-district VII selection was:
To be nominated, a student-athlete must be a starter or important reserve with at least a 3.30 cumulative grade point average (on a 4.0 scale) at his/her current institution.  Nominated athletes must have participated in at least 50 percent of the team’s games at the position listed on the nomination form (where applicable).
An accounting major, Kuhn maintains a perfect 4.0 cumulative grade point average. He has started all 16 games for Drake and leads the team in goals (4), points (13) and game-winning goals (2).
A management and marketing major, Shrout, who was named to the Hermann Award Watch List, owns a 3.4 GPA.  He has started all 15 games he has played in and leads the team in assists (5) and shots (32), while adding two goals.
Majoring in corporate finance, Clark boasts a 3.73 GPA.  Starting all 16 games for Drake, Clark has recorded two goals and added an assist from his starting defender’s slot.  He is an anchor of a Bulldog defensive unit that has posted seven shutouts.
A management major, Wurst maintains a perfect 4.0 GPA.  He has started all 16 games at his defender position for the Bulldogs, who have recorded seven shutouts this season.
An advertising account management and marketing major, Lewis maintains a 3.80 cumulative grade point average. She has started all 19 games for Drake, registering one goal and an assist.  She is a two-time All-MVC honorable mention selection and a first team All-MVC Scholar-Athlete team honoree in 2008.
Prev Post