Drake Theatre presents one of the greatest Greek tragedies 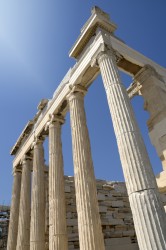 Drake University Theatre’s production of the ancient Greek tragedy “The Bacchae,” written by Eurpides and directed by Michael A. Rothmayer, concludes today with a performance at 2 p.m. in the Hall of Performing Arts, Harmon Fine Arts Center, 25th Street and Carpenter Avenue.

The play tells the story of the return of Dionysus (also known as Bacchus, the god of wine, fertility and ritual madness) to Thebes, the land of his birth, to prove his divinity to those who disbelieve it.

He returns in disguise as a mortal and accompanied by a band of women,
the Bacchae, who worship him in a state of religious ecstasy. He plans
to punish his cousin Pentheus, ruler of Thebes, who forbids the worship
of Dionysus within the city.

The conflict between Dionysus and Pentheus escalates as Pentheus
attempts to rein in this mysterious stranger and his women. But
Dionysus ultimately prevails.

“At its heart, ‘The Bacchae’ is a morality tale of the consequences of
denying the Gods,” said Rothmayer, associate professor and chair of theatre arts.

“The battle of wills between
Pentheus and Dionysus, however, represents so much more: that age-old
struggle between the forces of order and agents of chaos in a world
where chaos definitely has the upper hand.”

The play contains mature content not intended for children. Tickets are
$6 for the general public and $4 for students and senior citizens and
those with a Drake ID. They are available at the Drake Fine Arts Box
Office at 515-271-3841.