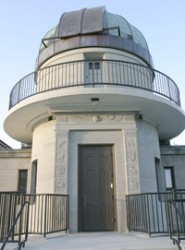 Major milestones in the history of astronomy and the pioneers who
made key discoveries will be explored during the fall series of Friday
evening public presentations at the Drake Municipal Observatory.

The free series will continue on Friday, Sept. 19, at 8 p.m. with a
lecture titled “The Real Force — Issac Newton, Edmund Halley, Charles Messier and Joseph-Louis Lagrange.”

Each week there will be a non-technical, illustrated presentation
on an astronomical topic by Charles Nelson or Herbert Schwartz of
Drake’s Department of Physics and Astronomy. The presentation will be
followed by the opportunity to view several stellar objects through the
large refracting telescope and several smaller reflecting telescopes.

The observatory is located in Waveland Park on the west side of Des
Moines and can be reached by turning west off Polk Boulevard onto
Observatory Road and following the road into the park. Parking is
available adjacent to the observatory.

The program will be held regardless of the weather, although the
selection for observation is subject to change due to sky conditions or
other special circumstances.

Individuals, families and small groups are welcome to attend the
presentations, which begin at 8 p.m. each Friday from Sept. 5 through
Oct. 24. A parent or responsible adult must accompany children.

Former legal adviser to Afghanistan commission to speak at Drake