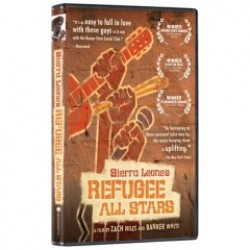 Drake University student Grant Wilson, co-owner of the independent video rental store Best Place Ever, is organizing a showing of  the documentary “Sierra Leone’s Refugee All Stars” at the Varsity Theater on Sunday, July 22.

“We’re trying to get people from the area to come out and support a great film,” said Wilson, a senior from Indianola majoring in English and philosophy.

The documentary focuses on Sierra Leone’s Refugee All Stars, a band of six Sierra Leonean musicians who came together to form a band while living in a refugee camp in Guinea. Many of their family and friends were murdered in the war, leaving each of them with physical and emotional scars that may never heal. Despite the horrors of civil war, they were saved and brought hope and happiness to their fellow refugees through their music.

“Sierra Leone’s Refugee All Stars” chronicles the band over three years, from Guinean refugee camps back to war-ravaged Sierra Leone, where band members realize the dream of recording their first studio album.

“Through their unflinching spirit, their powerful stories of survival and their joyful music, Sierra Leone’s Refugee All Stars celebrate the best that is in all of us,” Wilson said.

Drake gears up for 'One Hot Week. One Cool Time'