From Jazz to Classical, Drake Offers Many Free Concerts 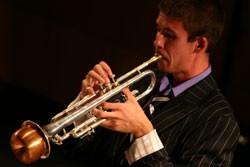 There will be a pre-concert dinner and TalkAbout hosted by Friends of Drake Arts at 6 p.m. Friday, Dec. 1, in Levitt Hall in Old Main. After a gourmet dinner, Meunier will talk about the concert program for the evening and present a synopsis of the history of Drake University bands with Thompson Brandt and Don Marcouiller. The cost for dinner and concert is $20. For reservations, call 515-271-3147.

The Drake University Honor Band Festival will continue as high school students from across Iowa perform as members of the Honors Wind Ensemble and Honors Concert Band at 5 p.m. Saturday, Dec. 2, in the Performing Arts Hall, Harmon Fine Arts Center.

The fall concert season will conclude with a Drake Symphony Orchestra performance at 8 p.m. Tuesday, Dec. 12, on the Jordan Stage in Sheslow Auditorium in Old Main, 2507 University Avenue. The orchestra, under the direction of guest conductor Clarence Padilla, will perform works by Copland, Milhaud, Mayuzumi and Hanson.