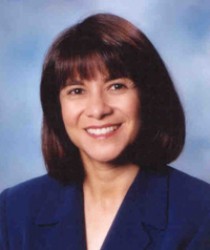 Rose Vasquez, LW’85, the executive director of the Polk County (Iowa) Human Services Alliance, was honored as the Drake Law School’s Alumna of the Year at the recent Supreme Court Banquet.

In 2005, Iowa Gov. Tom Vilsack appointed Vasquez to the Iowa Board of Regents where she is a board member and chair of the Human Resources committee.

Vasquez previously worked for Principal Financial Group as a diversity consultant for the human resources department and is “on loan” to the Polk County Human Services Alliance. Prior to joining Principal she was the state director of the Iowa Department of Human Rights and an assistant attorney general for the state of Iowa.

Vasquez, a native of Moline, Ill., earned her bachelor’s degree in 1977 from the University of Iowa in Iowa City, and graduated from Drake University Law School in 1985. She serves as a member for the Board of Counselors for the Drake Law School and Drake’s National Advisory Board on Diversity. Vasquez is also an adjunct professor for the Drake Law School, teaching first year law students the fundamentals of legal research and analysis. She is also involved with numerous professional activities and affiliations throughout the area.

Webb discussed the changing nature of relations between the U.S. and Europe and the growing misunderstandings between the peoples of the two continents in a talk titled, “America and Europe: Why We’re Drifting Apart.”

Webb is a television anchor – currently seen in the U.S. on the evening BBC World News on public television.

Foam, Mud and Simon Estes: it must be time for the Drake Relays